Fiordland’s small yet passionate community has a long history of conservation and activism. Discover Fiordland’s proud history and the many ways locals continue to support conservation in Fiordland.

For more than 80 million years, New Zealand has been separate from other landmasses. During this time, native flora and fauna developed in relative isolation and evolved into species completely unique to this area. New Zealand’s natural environment existed as a perfectly balanced ecosystem.

The arrival of humans brought an imbalance to this equilibrium. Māori arrived with rats and dogs,and  later, when European settlers came, they considered the forests dull so introduced large mammals to fill the “empty forests”.They also foolishly introduced stoats and ferrets. The effect of these doomed decisions has been prolonged and calamitous for both native flora and fauna. In Fiordland National Park, foreigners in the ecosystem include red deer, chamois, rabbits and accidental arrivals like rats. Stoats and ferrets came later to control the rabbits, then possums were introduced for a fur trade. In the years since, Fiordland’s biodiversity has been unable to deal with the influx however work is being done on a large scale to help combat these issues and save our endangered species.

Another issue of conservation that Fiordland has encountered is that of human greed.  In the 1960’s Fiordland was at the forefront of conservation activism when a hydro-electric power station was built on Lake Manapouri to provide power to a new aluminium smelter.  The original proposal for the power station involved raising the level of Lake Manapouri by a massive 30m and then fluctuating it by up to 7m.  This would have caused the beautiful and precious shorelines and islands of Lake Manapouri to be drowned and utterly destroyed leaving a mess of rotten and dead trees and slumped beaches.  The people of New Zealand successfully protested on mass in what is now known as the Save Manapouri Campaign and the lakes were saved.  Although the power station remains there are strict guidelines for managing the lake levels and a group called the Guardians of the Lakes is appointed by the government to oversee these.  Read more about this below.

The Department of Conservation (DOC) is the government department entrusted with the conservation of New Zealand's national parks, including Fiordland.

With such a huge area to manage, there is too much work for just one organisation. Fiordland’s passionate tourism operators are active in many conservation projects in and around Fiordland.

New Zealand has just just two native land mammals, and both can be found in Fiordland - although they are not easy to see. The long-tailed bat/pekapeka-tou-roa and the rare southern short-tailed bat/pekapeka-tou-poto are tiny creatures whose numbers are under threat. Both bats can be found in the Eglinton Valley near the road to Piopiotahi/Milford Sound. In recent years, DOC has targeted rats, stoats and possums in the Eglinton Valley area and thanks to these efforts, they believe numbers for both bats are on the rise. This is particularly good news for the southern short-tailed bat/pekapeka-tou-poto which is considered to be in danger of extinction.

In the late 1960s, a controversial proposal was put forward to capitalise on what is arguably New Zealand’s chief natural resource, its rainfall. An ambitious hydroelectricity scheme was touted for Te Anau and Manapouri promising to bring huge rewards for the economy. The plan called to raise the level of Lake Manapouri by 24 metres to meet nearby Lake Te Anau, creating a super lake. With nearby Patea / Doubtful Sound found 170 metres below the lakes, an ideal hydroelectricity scheme could be made by tunnelling from Lake Manapouri to the fiord.

The prospect of flooding what is considered one of New Zealand’s most beautiful natural assets, Lake Manapouri, caused outrage and kicked off the Save Manapouri campaign which ran from 1969 to 1972. The idea of such significant environmental damage occurring within a national park sparked New Zealand’s “green awakening” and Save Manapouri branches soon appeared throughout the country. A 1970 petition was signed by 260,000 people, which represented 10% of the country’s population at the time, and the issue became a major platform at the election. Thanks to people power, Lake Manapouri was saved and a scaled-back project opened in 1971 supplying electricity to the Tiwai Point aluminium smelter near Bluff.

The Save Manapouri campaign is significant in New Zealand’s history as it profoundly influenced the politics of the day, and it was the first time a major commercial project had been successfully opposed on environmental grounds. The Guardians of the Lake was established after the 1972 election to protect Lake Manapouri and Lake Te Anau throughout the construction of the subsequent hydroelectric scheme built at West Arm. The Guardians of the Lake is still in operation today. 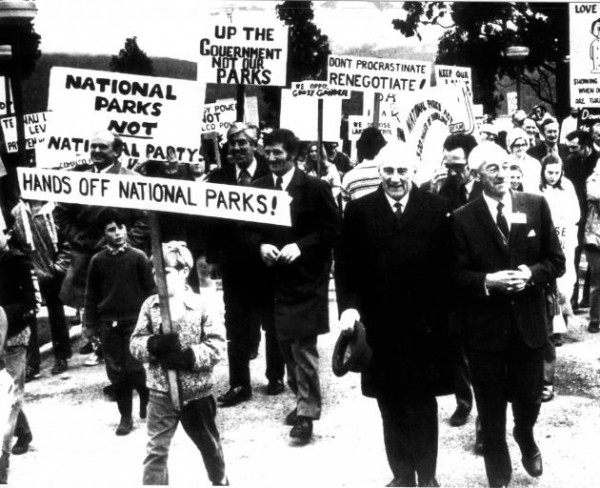 Hands off our National Parks - Save Manapouri Campaign

This award-winning project has helped promote environmental awareness and engage more than 500 children and 100 adults in active stewardship of the Kepler Peninsula in Fiordland National Park. Kids Restore the Kepler has been a hugely successful conservation project in Fiordland. Its main objectives are to eradicate pests and ensure the return of endemic species to the Kepler area; and to help young people develop leadership through involvement with environmental issues. Find out more about Kids Restore the Kelper here. 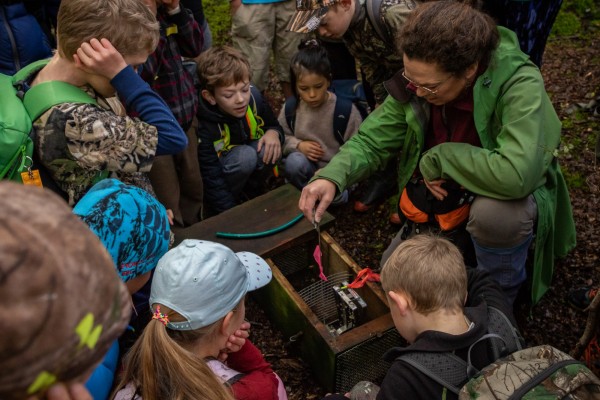 "Today I am more convinced than ever before that conservation is the real cornerstone of New Zealand's tourism industry. Tourism and conservation need each other for mutual survival and the right direction to go is to take more notice of conservation issues not less." (1998) Les Hutchins, founder of Real Journeys

Real Journeys operate multiple conservation projects and activities including trapping, Birds of a Feather Conservation Ball and Cruise for a Cause however their flagship project  is the Cooper Island Restoration.

The Cooper Island Restoration Project is Real Journeys largest and most remote conservation work in Fiordland.  Since it began in 2015, the half-million-dollar project has removed well over 600 predators from one of the third largest islands in Dusky Sound.  Most of it is funded by those lucky enough to see Cooper Island on a Real Journeys Discovery Expedition, the company donates $100 from every passenger’s ticket.  The initiative sees Real Journeys join the Department of Conservation’s Tamatea/Dusky Sound Restoration Programme; sharing its vision to make Dusky Sound one of the most intact ecosystems in the world.

See more about this project here. A dream trip for keen eco-tourists, this two-day hike either along the South Coast track or up over the Hump Ridge is a chance to check stoat and rat traps. The experience includes a jet boat ride up the wild Wairaurahiri River across Lake Hauroko, accommodation and breakfast at the Hump Track or Waitutu Lodges. Fiordland, particularly Tamatea / Dusky Sound is home to Pure Salt and has given so much over the years that giving back and looking after it is simply natural. Pure Salt believe that everybody can give something to look after what surrounds them and that collaboration of small and big efforts is what effects change. For Pure Salt the giving surrounds the overall vision to restore Tamatea / Dusky Sound to one of the most intact eco systems on Earth, and New Zealand’s largest ‘bio bank’ - a source of endangered native species that can be sent to predator free locations throughout the country. It’s a big vision which needs a community to realise. Pure Salt as a business allows the passionate owners to do their bit together with a large number of other beautiful people through Tamatea, TamateaBLUE, TamateaLEARNZ and TamateaART adventures.

Pure Salt provides the owners with a platform to fund run those initiatives.. Tamatea, TamateaBLUE, TamateaLEARNZ and TamateaART.  Three Tamateaadventures per year running predator control and monitoring programmes on Mamaku / Indian Island as well as Long Island to help restore above-water ecosystems. TamateaBLUE is about everything below the surface ie sustainable fishery, biosecurity as well as underwater cleanups. TamateaLEARNZ aims to share the vision and passion with the next generation through connection as well as free online educational resources as it’s a truly intergenerational project. TamateaART is an ongoing collaboration with artists whose artwork is sold to help fund the project and keep the connection between art and conservation current. To do your part you can donate, volunteer, charter, share your skills, tell the story or simply get in touch with new ideas.  Find out more here. 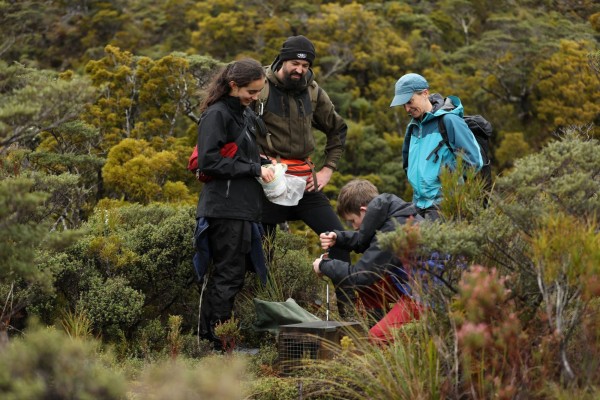 Another win for conservation in Fiordland
A critical preservation project is currently underway In the tussock basins of the Murchison Mountains in Fiordland. This remote area is off-limits to everyone except DOC staff and scientists checking on the last remaining wild population of takahē. The takahē is a large flightless native New Zealand bird. It was thought to be extinct for more than forty years before being rediscovered in the mountains of Fiordland in 1948. The project is regarded as one of Fiordland’s greatest conservation success stories. It is also possible to catch a glimpse of the shy takahē at Te Anau’s Punanga Manu o Te Anau/Te Anau Bird Sanctuary, managed by the Department of Conservation.

For further information on conservation efforts in Fiordland see the Department of Conservation website. 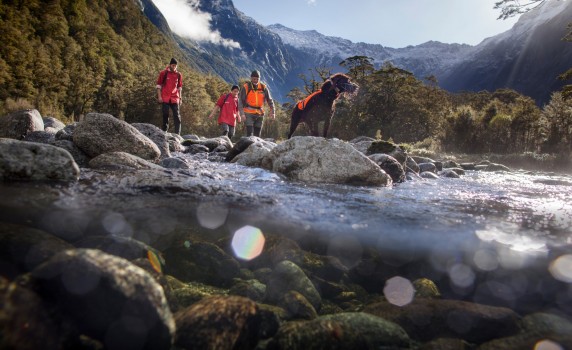 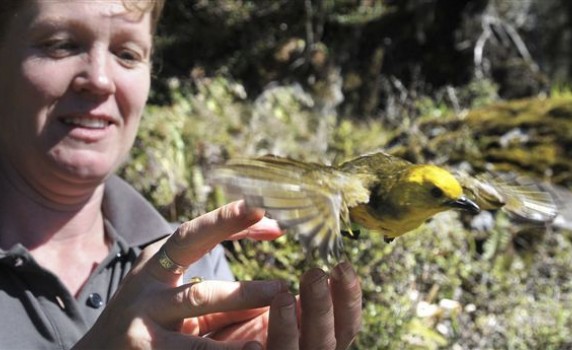 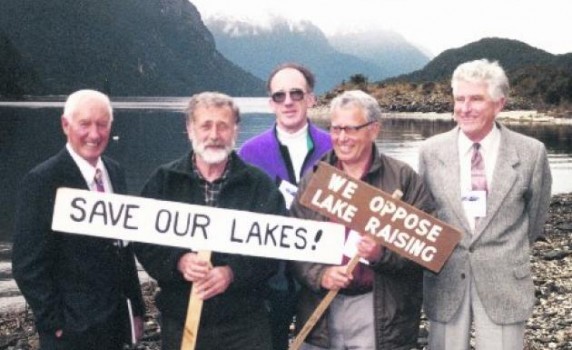 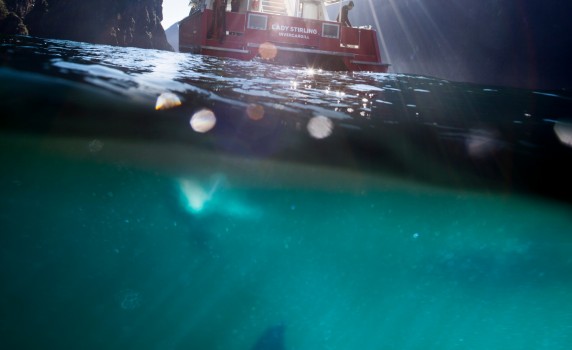 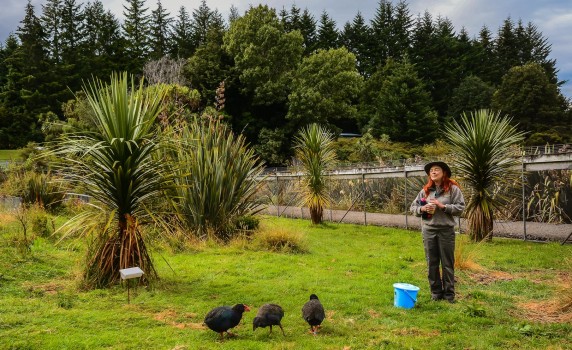 What does kaitiakitanga mean?

Kaitiakitanga means guardianship and protection. It is a way of managing the environment, based on the Māori world view

How do I find sustainable businesses in Fiordland?

Look out for businesses displaying the Qualmark accreditation or are members of the New Zealand Tourism Sustainability Commitment. Find out more here.

Where is the Kepler Track?

The Kepler Track is found in Fiordland National Park. The track starts and finishes in Te Anau.

What is there to do in Te Anau?

Te Anau is known as the gateway to Fiordland, Piopiotahi / Milford Sound and Patea / Doubtful Sound. It also offers a range of activities which makes it worth staying a while. Activities include day walks, kayaking, sailing, cruising, fishing, cycling, hunting, jet boating, farm tours and scenic flights by float plane and helicopter.